I had three scenes to work on for Tuesday’s class, although one will have to wait until next week’s audition class 🙁 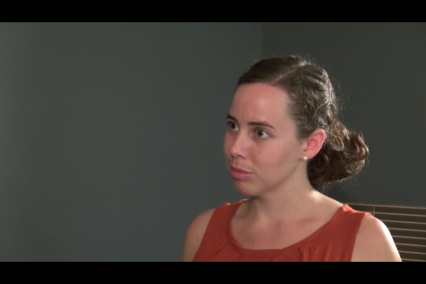 The first was a dramatic scene from Bloodline, which I have seen done before in class, but had never seen the show. I watched the pilot before class, so I would at least know who all of the players were. Plus, with Suzanna now having multiple Bloodline scenes in her repertoire, I kind of really wanted to check it out (and will probably keep watching it;) ) After watching the first episode…the more work I did on the scene, the more excited I was to step into Meg’s shoes. Which was odd, because from what little I know of her, I don’t quite relate, but still think she would be so much fun to play. And I got to 😉

We ran it a few times in the back room before doing it on camera. The first take, our notes were for him to be more threatening, and for me to be more scared. The next take, he was more threatening, but I was too vulnerable. We switched from standing to sitting for the last few takes, which I really did not like, but I loved getting to play the scene so many different ways, with different levels of vulnerability, determination and fear, until I got the right balance for the last take 😉 We did the subtext exercise before that one, but our subtext kind of turned into some of the dialogue from the actual scene, so we didn’t really go into what we are masking at our cores, but it was still helpful in getting into the right mindset for the scene.

My second scene was a comedy, from Odd Mom Out, which I really enjoyed, especially with the pop culture references. The first few takes were a bit off kilter, because I was playing it as a comedy, but my scene partner was much more reflective, which was very fitting for her character the way it was written, but we didn’t exactly jive. We did get there eventually, and it was really funny, with most of our notes being about nailing certain words, or funny lines, rather than anything with our acting.

It was a really lovely class, where I got to do drama and comedy and spend an evening doing what I love.

“My goal has always been not to look forward to the next thing, but to relish and celebrate the successes I have at the moment. Whether it’s landing a part in a student film or having a good day in acting class, I never discredit anything.”

We noticed you're visiting from Germany. We've updated our prices to Euro for your shopping convenience. Use United States (US) dollar instead. Dismiss