Yesterday I had the pleasure of attending the 5th Brunch in the City, which was my 3rd. This time, I didn’t know anyone, and wasn’t the greatest at networking, although I did meet some cool new people, and had an incredible time. As always, Danielle and everyone who works to make this event a reality outdid themselves.

Although brunch is traditionally about food, it is also an occasion to dress to impress, and yesterday was no exception. To make things easier on attendees, there were different stations offering free manicures, henna and brow shaping. Since lines are usually a great way to meet people, I went to all 3. 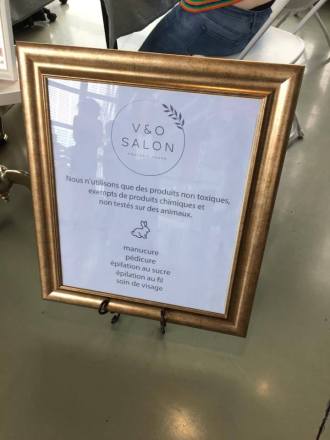 First, I went to get my nails done. This year, they had a new vendor in the form of V&O Salon, that just opened a few months ago. Since I was the first one there, I got a chance to talk to the owner, who filled me in on V&O, which stands for vegan and organic. Normal nail polishes have lots of chemicals, but the ones they use do not. Also, I have a habit of ruining my manicure at these things, usually as soon as I reach into my purse, but this time I went back and they fixed it, so I get to show off my nails rather than taking it all off.

Next was Habibis Brows, where Nadine expertly made my brows beautiful. I have sort of been self conscious about my brows, because I am not really good at taking care of them, and there was this one time in CEGEP where someone said my eyebrows looked just like my brother’s. But this time, she seemed so excited because she really loved what she was doing. She also complimented me on my natural shape and arch and while it may be because I was ‘the client’ it felt sincere and I really appreciated it. Not to mention giving me a few tips on how to try some of the stuff at home.

Finally, I got some henna from Viva La Henna, for the first time since the flaming heart henna tattoos my cousin and I got on our lower backs in Punta Cana when we were teenagers. We thought we were pretty awesome. This henna is definitely fancier, more sophisticated, and makes my hand look incredibly cool as I type this. Plus, Riva was super fast, so the line pretty much flew by.

There were lots of shopping opportunities, as well as some female and youth empowerment stations, but I was a little lax with my pictures on those fronts. I did, however, make sure to get a picture of all the things I ate.

For the brunch part, waiters and waitresses passed out treats from Traiteur Brera. The first thing I tried wasn’t in the email, so although I am pretty clear on the cantaloupe and prosciutto, I am not sure what kind of cheese it was. It was a lovely mix of flavors if you eat it all in one bite. Which was probably not attractive, but my palette thanked me. Then you have the smoked salmon wrapped around cream cheese, mini pancakes with syrup dipping sauce, granola tarts, chicken and waffles (which I have always wanted to try) and my personal favorite, nutella and ricotta grilled French toast. Which was basically a grilled cheese stuffed with ricotta and nutella. As one of my new acquaintances told me, “It makes your day better, even if it was already great.”

If I am being honest though, my weakness was the desserts. You might be surprised to find out just how big my sweet tooth is. Or, after 3 years of these posts (and countless afternoon teas), you might be expecting it. First I sampled the delectable pistachio cheesecake from Little Leah’s Kitchen. It was just like my grandmother’s cheesecake squares, only with pistachio instead of strawberry and walnuts, so bonus points. She also gave out cake samples, made with rose water, which just makes anything sound and taste so fancy. Decadent would be the word I would use to describe her dessert table. 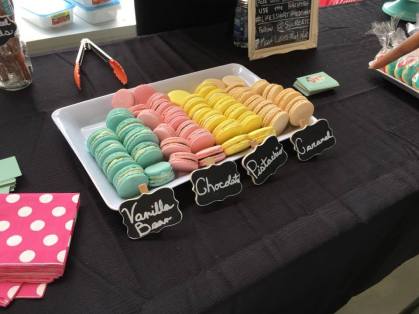 Sucre etc. offered giant macaroons, as well as treats that were wrapped for you to take home and save for later, including chocolate covered oreos, chocolate covered pretzels, and very on point iced cookies. Colorful and fun would come to mind for this company.

Léché Desserts had a pin board of pink covered donuts, which were a little bit greasy, but entirely delicious. Points for the interesting display, and for my favorite color. 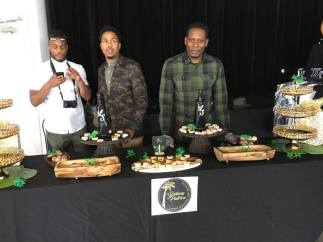 Les Délices de Patrice had a variety of tropical themed Macaroons. I was incredibly tempted by the coconut and Ferrero Rocher ones, but opted for the crème brulée, which I was told was the best flavor. In addition to the cream at the center, the top also had that layer of burnt sugar. It was really good, but I also wish I would have taken a coconut one. 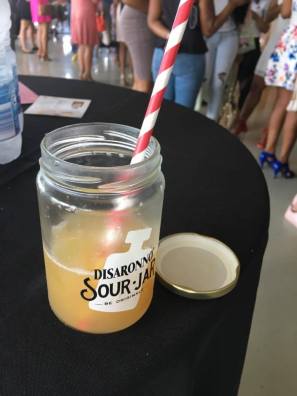 For those who prefer a boozy brunch over desserts (or who like both, who am I to judge) there were mimosas, Tia Maria mint frappés and Disaronno Sours. I mostly wanted one for the mason-type jar, which this year came with a cover. Possibly because they wanted us to shake it before drinking, but it also made it a lot easier to take the cup home.

Last, but not least, as I was heading out, I got a boozipop to brave the heat. Mojito was the flavor, and although I wouldn’t recommend chewing and eating the mint leaf, the blueberries, and the Popsicle itself were delicious and perfect on such a hot, sunny summer day.

I leave you with a question, that was on the wall, and invite you to answer it, either to yourself, or in the comments. 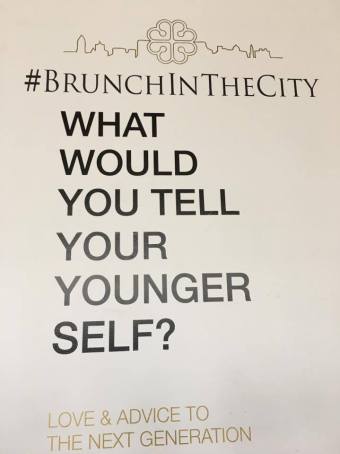 “You are beautiful, smart, kind and caring. You are also stronger than you think, both physically and emotionally. Don’t be afraid that people won’t like you, or that you’re intruding, because if you never put yourself out there and show people who you are, you’ll never find the people who will like you, the ones who don’t think you’re intruding, who will love you. Magic really does happen outside of your comfort zone, and although that sounds terrifying, the more you do it, the less scary it is. And don’t be afraid to fail, or to fall down, because that just means you’re putting yourself out there, you’re living life. Don’t put things off until you’re better at it. Just do it, and learn along the way. And finally, let the people that you love know how much you love them. Including, and especially, yourself.”