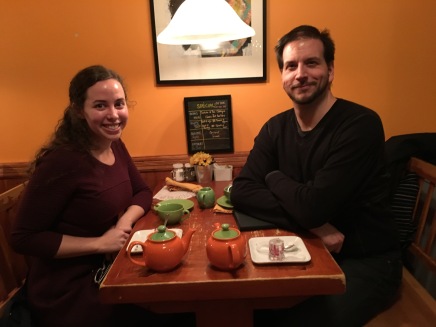 Did I want to go here because it sounds like Gryffindor and I love Harry Potter? Maybe. Was the Afternoon Tea worth it even though it has nothing to do with J.K. Rowling’s masterpiece? Absolutely. 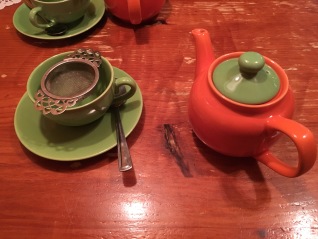 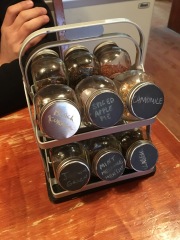 Your first step is to choose a tea. JF chose gingerbread, while I went for Spicy Apple Pie, which sounded absolutely delicious, but I never got to taste, because they were out of it. I opted for the Gryphon Breakfast, which was pretty good, but not the dessert tea I had been looking forward to. 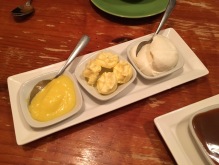 Next came the scones and assorted toppings. The scones were warm, which I love, and had a very subtle taste that let the spreads shine through. We had the option of caramel, raspberry jam or an orange and apricot marmalade, with the traditional lemon curd, butter and clotted cream.

This was JF’s first tea, so he went for the butter and jam, not overly concerned when I told him about the brilliance of clotted cream. He did try it, but it seemed more to make me happy than because it was a combination he wanted to try. As for me, I put clotted cream on all my halves, then tried one with raspberry jam and one with lemon curd. Both were absolutely delicious, and I would have done the same thing for my other scone, but JF pointed out that I should try all of the things if I wanted to be able to comment on them. So I put clotted cream on both halves (I’m a traditionalist that way) then put half lemon curd and half raspberry jam on one, with half marmalade and half caramel on the other. I am not a huge fan of the marmalade, just in general, nothing to do with theirs (I believe JF enjoyed it), but the caramel was delicious. Incredibly sweet, but delicious. Especially with the clotted cream. 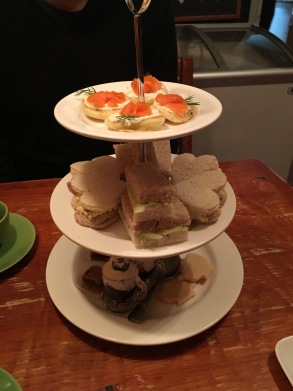 Ah, the food. When the waitress brought us the tiered plates, she told us that if we needed to have anything boxed up, to just let her know. JF and I both nodded and thanked her, but as soon as she was gone, I told him, “Just so you know, I’m finishing everything. Might be unattractive, maybe I shouldn’t, but there will be nothing left.”

“I know, I tried not to laugh when she offered to box things up.” he assured me. Clearly there is a reason we are friends.

We started with the smoked salmon, cream cheese and dill bites. They were on a type of very soft pita bread. The other plate had 3 cucumber and butter sandwiches, and 2 egg salad sandwiches each. I like to try everything, then decide which is my favourite, so I can start with the one I like the least and end with the one I like the most. So once there was only one left of each, I did cucumber (why was there butter?), salmon (it was really good, perfect ratios of everything, and JF’s favourite) then egg. The egg sandwich did not

have onions in it, which is always a concern for me, but it did have a lovely hint of cinnamon, which I think is genius. Unexpected, but soooooo good! It was also cut out into heart shapes, which had no effect on taste, obviously, but it was pretty darn cute. Interesting to note that they used white and brown breads in every one, which in theory pleases everyone, but also kind of makes sure that no one actually gets what they wanted. I don’t really mind, but I do find the concept kind of funny. I wonder what would have happened if we would have had to fight for the brown ones? 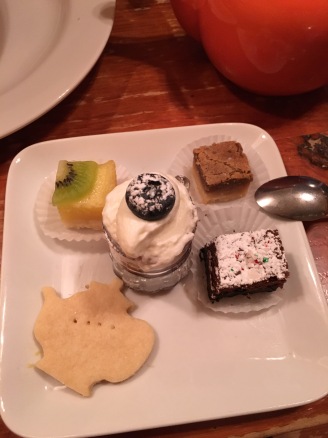 Finally, we got to dessert. Not to say that Afternoon tea is an excuse to eat lots of desserts without people thinking you’re weird…but not to say that it isn’t. The shortbread cookie was probably the least interesting of the desserts, but it was really good for what it was, and I love the tea cup shape. I thought the sucre a la creme square (basically a sugar pie bite) would be my least favourite, so I ate it first, then immediately warned JF to save it for the end if he was also trying to save the best for last. The chocolate cheesecake was delectable, and I liked the touch of peppermint sprinkled on top. The lemon tart bite was very lemony, which I personally am a fan of, and I liked that there was kiwi on top. I saved the blueberry jar for the end, and I was right. Blueberry compote and a bit of cake topped with whipped cream and a blueberry…yum 🙂

It was my first official Afternoon Tea in Montreal, and I would deem it a complete success. Although I am not opposed to going to these teas on my own, it was really awesome to be able to go with a friend. We not only had enough to talk about all throughout tea, we also stayed around talking until they came to tell us they were closing. So, as far as Montreal Afternoon Teas go, I would definitely recommend it, and suggest you bring an awesome friend along with you 😉

I am an actress/writer/producer/BJJ enthusiast who is sharing her journey, one post at a time :)