This has been a pretty busy week for me. Not even once did I get to stay home all day in my pjs 🙂 I was a standardized patient for 3 days, getting lots of ultrasounds, so many that if ever a doctor was having trouble finding my gall bladder or my IVC, I could direct them right to it. I also know all kinds of medical facts that are slightly making me revert to my teenage dream of becoming a doctor…I’ll be fine once I join the cast of Grey’s Anatomy 😉

On Tuesday, Rikki and I had our first Dale Carnegie class, so we went out for dinner before meeting a bunch of interesting people, and learning some cool tips to better navigate networking. Since our grandfather wanted us to get the most out of it, we didn’t sit together, and when I found myself thinking ‘please don’t pick me, please don’t pick me’ I responded by standing up and volunteering for whatever it was. I guess it’s my own way of not letting my fears beat me, because I do whatever scares me instead of sitting there being afraid of it. Or at least that’s what I do when it comes to public speaking.

After class, we went out to celebrate our friends’ job interview. I normally don’t really like going out to bars, but we just sat at a table and talked for a couple of hours, which I thoroughly enjoyed. 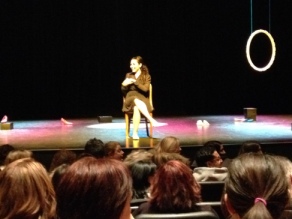 On Thursday night, I went to see the play of a woman who used to be in my acting class. It was a one-woman show, so she was the only one on stage. The thought of this terrifies me, and I am so impressed that she could put on this show, about her life, where she is the only one talking. It was amazing, going from funny to sad to hilarious and even though I’m not Italian and have nowhere near her miraculous stories, I still related to a lot of it. I don’t know when it will next be showing, but if you have the chance to see 8 Ways My Mother Was Conceived, definitely go for it! 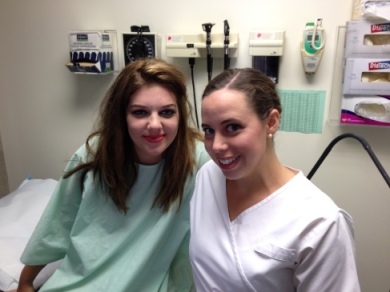 Friday I filmed a short for TVMcgill, the one I had auditioned for with a British Accent. I got the whole hair and makeup treatment, but I also looked too young I guess, so the makeup also made me look older and tired, which was really interesting every time I saw myself in a mirror. We weren’t a big team, but everyone there was really nice and fun, I loved the atmosphere on set, and I hope to get to work with them again some time. Not to mention, the short should be a part of the Fokus Film Festival, and if we remember, my goal now is to be in things that go to festivals. So it was a very happy and productive day 🙂

Saturday I had an audition for another student film, but this one was french. There wasn’t a lot of dialogue, so I was kind of worried I would be expected to do a monologue, because I only know English ones. Luckily, they actually need someone to live in the silences, so the audition had two scenes, one with dialogue and one without. I was slightly getting conflicting advice from the script, and from each of the guys there, but in the end, I think it went pretty well. Or at least I think one of the guys liked me and the other not so much. He plans on filming it this week, so I should know soon enough!

Yesterday, as most of you know, was the Oscars. I managed to see all of the best picture nominees, as well as the movies that had their directors or actors nominated. I think we all have our favorites, but the winners were well-deserved, and I think Ellen should host all of the Oscars from now on. She was hilarious without being offensive, she ordered pizza, and one of my life’s ambitions is now to be in that selfie, or you know, another one like it. Fingers crossed!

“No matter where you’re from, your dreams are valid.”