Since last week was the last in June, we had our audition classes with Suzanna. On Monday, I chose the Rabbit Hole scene, because I figured it was the one I had the most to work on. I volunteered to go first, and my first take was definitely my best take. Not to say I shouldn’t have done the others, because they were very useful, but the first time is where I connected the most emotionally. There is a part where I talk for a paragraph, so my reader looked up at me, and at first it felt off, but then I just felt it and connected.

Suzanna asked me about my moment before, because she felt I was coming in already expecting what was about to happen in the scene. Having done my homework, I explained that I wasn’t reacting to what I knew was coming, but to what I had been doing in the scene before this one. Which is true, I got the core right, but I needed to cover more, at least in the beginning, because the thing upsetting me is something I don’t want to share with my husband.

For the last take, Suzanna had me try it angry with my husband, so I try to leave and get offended with his accusations rather than just hurt. There are some moments that felt so much stronger with the anger rather than the pain, but a lot of moments truly benefit from the raw vulnerability I usually play it with.

I recently had an audition where we had to send in 2 different takes of each scene, and I think it’s a good thing to try while prepping all scenes. If I do the whole thing angry, then the whole thing sad, there are obviously moments that won’t work, but hopefully a combination of the two will bring a richer, more moving performance. And I always have to remember to mask my core. 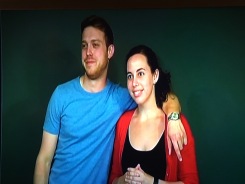 For our actor roles and auditions, we were all paired up, so I was the bubbly and overexcited wife with Nick and Sean, then a receptionist who is going on a cruise for the second one with everyone. Often when we do commercials I wish I could have done an Actor role instead, but these were sooo much fun, and I can only imagine how hilarious it would have been to actually get to film them.

On Tuesday I did a bit of background with some awesome people, discovering that someone I admire is even more of a class act than I already assumed them to be.

Wednesday I was all over the place, starting by helping a friend with a Self Tape. She thought my original offer was for a limited time only, some kind of resolution I was trying out, but no, I am actually committing to help out with readers and self-tapes and running lines and what not for however long people need me, as long as I am available. Why would I say no to the chance to act and help out a friend, all in one?

Next I went to meet Carolyne so we could catch up and talk about the industry and our lives. As always, she offered insightful advice, reminded me why I need to stand up for myself more, and we left emphasizing our Compass Feelings. If you didn’t listen to Dallas Travers’ 5 Day Acting Reboot, you probably don’t know what that is, and neither did she. At least not with that terminology. Basically, Day 1 of the reboot was about finding a feeling that we want to drive our careers and our lives. Instead of what goals we want to accomplish with our acting, we should be asking “How do I want acting to make me feel? How do I want to feel every day?” I chose Confidence as my Compass Feeling, because it has more to do with how I feel about myself, rather than how I think others feel about me. The whole reboot was pretty awesome, if ever you do want to check her out and find out more secrets. I was lucky enough to be featured in one of the Live Q & A sessions:

In class that evening, I chose to do the Eternal Sunshine of a Spotless Mind scene, because drunk is still an issue. Unfortunately, I was pretty off. The first take felt like I was just running lines, and the second like I was playing anger more than feeling it (she told me to try being angry rather than a giggly drunk). The third take I sat on the chair rather than just standing, but like the wall from last week, I think I was using it as a crutch to drive the performance. And I focused again on the being drunk rather than the heart of the scene, which I did work on, but did not internalize.

I was on book for the actor who came after me, and was truly inspired by the fact that he brought a monologue rather than doing one of his scenes over. Although sometimes I think I really benefit from an extra chance to work on a scene, I think it would be incredibly beneficial to start bringing in scenes from my target shows, or monologues I want to work on. At least when I feel like I already did my class scene justice.

I had to leave class early for an interview, to see if I could attend an acting class in Los Angeles. This is definitely progress, because almost all of the really cool classes I have taken were chosen, not entirely, but very much because there was no audition process. I have often taken an entry level class, when I know an intermediate class would have been so much more useful for me, because trying for the intermediate class would have meant auditioning. And the possibility of being turned down. This time, I had to pull out an old monologue, and answer all kinds of questions no one has ever asked me before. It was a very interesting process.

On Thursday, I was back in Quebec to film some scenes for Deep Web, which were incredibly reminiscent of the Dark Shack. There were less ropes and someone different was wielding the knife, but it almost felt too close for comfort.

“Your future depends on many things, but mostly on you.”

Stand Up For Yourself

Find a Job You LOVE