I know I mentioned all of the motivational videos and reading I have been doing in my last post, and thanked some people for their awesome sharing of information (Thank you Dallas and Bonnie!), but this weekend I actually put it all together and compiled a huge list of things I should be doing. I also prioritized it according to whether it would help with my #1 priority and goals, or if it was just actor busy work that I feel like I should be doing so that I can say I am doing something rather than because it actually needs to be done. I am also trying some new things, like mantras (while shoveling, instead of cursing the cold) and gratitude journals and actively telling people my goal every day. When people ask me what I have been up to lately, I will either mention my short or my Tuesdays at 9 idea*. At first I was just mentioning how I want to join ACTRA, but I opted to talk about things I have more control over instead. This can lead to a wealth of advice and information or simply a longer conversation than when I normally answer with “Nothing much, you?”

I also got to be a reader again, which I absolutely love, and did a self-tape with my parents. There were some unusual words in the dialogue, which meant it took a lot longer than it should have to film because one of them kept laughing and making us start over. So, not the most time efficient, but I am pretty sure we all had fun. I won’t know for a while if I got the part, but I am really happy with the take I sent in. I hit the notes I was trying to, and even discovered some new ones that I did subconsciously.

As for class last night, Jake and I ran the scene from La La Land a few times in the hallway, then went 2nd after an excellent rendition of a scene from Before Sunset. We did our scene 4 times, and although I felt good after the first take, Suzanna was definitely right in saying we weren’t really listening to each other and connecting like we should be. The second was a solid take, then I tried not getting up and leaving at the end, which reaffirmed that my first instinct had been a good one. Suzanna suggested he try being more defensive in the next one, which raised the stakes and brought out the emotions. When class ended, that was my favorite take, although we did do it once more. We started out with an improv, but no one explained it to Jake, so we just kind of had a fake conversation, long before anyone actually started listening. Suzanna explained it so we went again, still trying to achieve our goals even without the text. I didn’t really like that take at the time, but when I watched it at home, that last take was my favorite. We were so connected and honest, I wasn’t afraid of taking my time and using pauses…I also love how Jake said a line differently at one point and I adjusted my reply, because I was connected and listening, not just saying my lines. I always find it interesting to see how an actor will react when they are supposed to repeat what someone else says, but that someone else says something different. Do you stick to your original line, or do you adjust to make it work?

Also, this is probably silly, but when we turned down props (wine glasses), which would have given us something to hold during the scene; Jake took my hands in his. It was just for the beginning of the scene, even before the first lines, but that’s the kind of thing that makes me feel awkward, possibly because it’s so vulnerable to just look into someone’s eyes as they’re holding your hands and not look away. Or pull away, which I tried not to do. In life, as in acting, I am trying to be more open and less afraid, so while the hand holding was not a big deal, it was still the kind of thing that made me nervous, but that I did anyway. And Suzanna told us it was a great way to connect with your scene partner and find the love at the start of a scene, so the kid has good instincts 😉 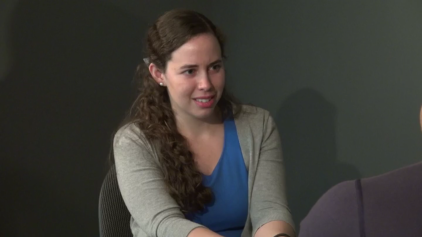 “Daring greatly means the courage to be vulnerable. It means to show up and be seen. To ask for what you need. To talk about how you’re feeling. To have the hard conversations.”