You might have noticed that I haven’t been updating this blog as regularly as I usually do, so I am going to tell you a bit about what I have been up to this Summer, then get back into a more weekly groove once you’re all caught up.

To start, I had the awesome opportunity of being on set a lot in June and July. I had one of my top background experiences, but I also spent weekends on set with speaking parts I can’t wait to share with you. From an aspiring actress in Overexposed, to a determined young woman in The House They Lived In, without forgetting my last days on Deep Web, and a reshoot for the short I wrote.

I continued working at McGill, being a reader for a casting director and even ‘directed’ a few sessions. I got to see a little behind the scenes on a tv show currently in production when I was hired to read for the actors that were out of town for rehearsals and table reads. So much fun! I also got to go around beautiful locations in Montreal and get photographed on 2 separate occasions, once for props in a short film (the pictures are beautiful, I can’t wait until it comes out so I can show them to you) and once for a slightly impromptu headshot session with the ultra-talented Owain Thomas. Seriously, you could not ask for a better photographer. The time flew by, he made me feel confident and comfortable (and super entertained) and the shots he got are amazing. 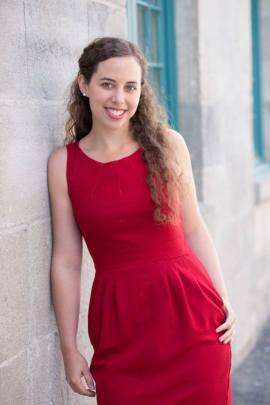 If you’re wondering how the short I wrote is coming along, we have put the footage together, and are now working on synchronizing the sound and getting color correction. I’ll have to ask for some help with the music soon, but it is coming along really well, thanks to my awesome cast and crew, and talented editor. Not to mention, we now have a title. Instead of Really Short Short (or RSS) as I have been calling it, it will now be The Anniversary. There have also been some gut wrenching setbacks on this journey, but I am not letting that stop me or get me down.

In July, I attempted to win Camp Nanowrimo, the venture where you write a book in a month. The first few days were right on track, but then I spent 13 days on set, and started Get in Gear for the Next Tier, Bonnie Gillespie’s hundred day program to bring your career to the next level. These aren’t excuses, I know that I ‘failed’ Camp Nano, but it was a conscious decision. That might be worse, but I had the choice between writing, working on my career or working on me, and I chose me. Instead of sitting alone at a table and writing, I became somewhat of a social butterfly, getting to know everyone on set. It was completely out of my comfort zone, but the more I did it, the more comfortable I was going up to introduce myself and start a conversation with a stranger. By the time I finished those 13 days, there were very few strangers left on the set. And as far as my time off the set…I tried actually living my life, rather than living vicariously through the characters and the stories I write. It was more exciting, more painful, and a lot scarier than when I write, because I wasn’t in charge of the story, or the other people, but they always say “write what you know” and I know a lot more things now.

In class I have had the pleasure of stepping into characters from Kissing Jessica Stein, Scandal, Ozark, The Big C, Episodes, Prime, Ferris Bueller’s day off, Flight and Girls. Some called for kissing and accents, others for pain, anger or comedy. Every one was a wonderful learning experience.

I took a singing lesson with Caroline Gauthier, which wasn’t so much about the singing as figuring out how and why I try so hard to hide my voice instead of sharing it with everyone. She was absolutely lovely. As was Patricia Chica, who gave a Chi Energy workshop back in July, and hosted a Table Read for her script, Montreal Girls, just the other day. The workshop was definitely an exercise in sharing my vulnerability in front of an audience, which is something I would usually try so hard to keep hidden. Lots of discoveries and magical moments in that one day, so I can only imagine what will happen to everyone who signs up for her 3 day workshop in October. As for the Table Read, any opportunity to act and step into someone else’s shoes is a gift for me, so being able to meet new actors and work with a script that hasn’t been produced yet…it was a wonderful experience. 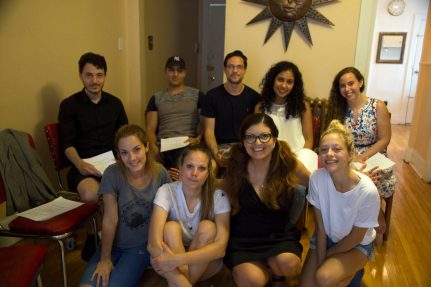 In an attempt to convince the casting gods that I can be a kickass heroine someday, I took classes with my dad so that I can work with firearms. This isn’t necessary when it comes to film sets, but I am thinking it can’t hurt. And it was a lot of fun.

Another thing that can’t hurt is the bimonthly actor’s meet-up a brilliant friend of mine initiated. If you happen to be in Montreal, every 1st and 15th of the month, we will host a meet-up for actors to get together and act. Every actor will bring 2 sets of sides, then we will pair off and run the scenes. Cold reads at first, but we can get familiar with them,  switch roles…it’ll be a chance to network, of course, but the main goal is to work that muscle so when auditions come along, we are so used to working through scenes that it is fun rather than new or stressful. It’s an awesome addition to classes, an opportunity to learn from fellow actors, and something to keep your tools sharp when you can’t make it to class.

Finally, I sent in a few self tapes, booked 2 of them, and went on 3 auditions. One I didn’t get, one I haven’t heard back from, and the other one I booked. Well, I booked a part, not the one I auditioned for, but it will definitely challenge me a lot more as an actress than the ones I auditioned for would. I am more used to challenging myself in class than on the set of a really beautiful feature film I am honored to be a part of…but I tend to react well under pressure, and I have complete faith in the director/writer/producer who gave me the part.

As far as personal developments, I think I have grown a lot this summer. Not literally, but I have learnt a lot and experienced all kinds of new things. Some of these were amazing, some made me stronger and some simply broke my heart. But that’s okay, because I put myself out there, I was vulnerable and I gave it my all. Which is the point of all this, right?

To be more specific, I spent a bunch of time with my family, I went out for brunches, coffees and ice creams with friends, I volunteered at Comic Con (which let me see so many amazing panels), I had what I would best describe as a summer fling, found my confidence only to put it through multiple tests, spent 3 days at the same hospital for 3 different people (we’re all okay), finally got called Auntie Manda and started to believe that maybe, I AM ENOUGH.

“All life is an experiment. The more experiments you make the better.”