I have spent the past few days celebrating my birthday, working and having dinner with family. But the real fun came yesterday when I got to film my first talking scene of the movie! 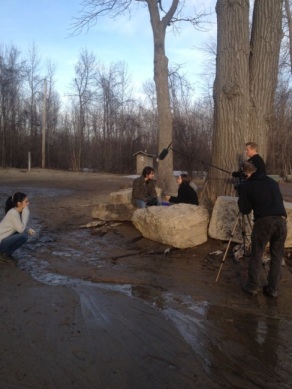 We started filming late afternoon, mostly walking shots along the water. I didn’t have a jacket at first, so it was kind of chilly, but it was nice in the sun and there were beautiful locations. Our final destination was beside a beautiful lake, with the sun starting to set…mesmerizing. We got settled in, then James (who plays Josh) and I got to do one of our scenes together. We rehearsed a couple of times, then went for it. We did it from many different angles, so not the one take we had planned on, but I definitely enjoyed it!

We built a fire, and were just going to film us around it, but it was such a beautiful shot that the writer decided to get some dialogue in. He had told me earlier on that if he liked what you were doing, you might get a more prominent role in the film, and that is exactly what happened here. He took a scene that was supposed to happen between two characters, and added Josh and Amanda into it, giving us some of the other characters’ lines, and also improvising some new ones. The smoke was insane and getting in our eyes, but the fire also kept us warm.

If ever I have any doubts about what I want to do for the rest of my life, I just have to be on a set, or filming to see that this is it. Yes, I love writing, but there is always a character in every story I write that I plan on portraying when the book gets adapted into a movie 🙂 So many people say that if you can do anything else and be happy, absolutely anything other than acting, then do that. I know I can probably be happy without it, but I can’t see any career or hobby that can make me nearly as happy as acting does.

“Find out who you are and do it on purpose.”