So, I don’t know about the rest of you, but I am really enjoying 2014. I have been working on some screenplays and catching up on some classics I had never seen, like The Godfather and The Shawshank Redemption, but it’s the acting that really has me excited 🙂

On Tuesday I had a great time in class. I specifically enjoy the audition class, because I get to be a reader in addition to acting. Of course, it’s more interesting to act with another person in your scene instead of a reader beside the camera, but I think I am pretty lucky reader-wise in class, and it is definitely preparation for real auditions. The more you audition, the easier it gets, because the nerves don’t overwhelm you and you can let yourself shine. Really fun class, and I left with an audition for Valentine’s Day <3 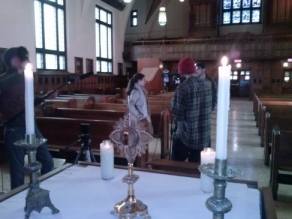 On Thursday, I found out that I got the part I had the coffee meeting for, which of course led to a Happy Dance and a whole lot of smiling and excitement. We shot the scene on Saturday, in a church, and I had an amazing time. The guy in charge was super nice, I loved the crew and I got to act. Of course, I am at a point in my career where I would have done it for free, or even paid for it maybe. I have been submitting myself for volunteer background acting (which has been turning out pretty awesome anyway). But on Saturday, I did my first paid, non-extra role since I was a child. This was an item on my list of 25 things to do before I turn 25, as well as on my list of resolutions for this year. Double whammy! 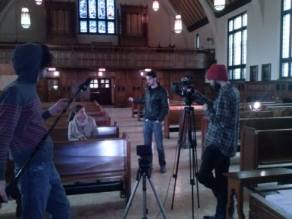 It was a very exciting week, and I get to spend the next couple of days on set again, so next week is looking pretty awesome as well 🙂

“Always bear in mind that your own resolution to succeed is more important than any other.”