Yesterday I went to Female Department’s Brunch in the City for the second time. This year I was sans Carolyne, but I did still manage to have an amazing time, and hang out with some pretty cool people 🙂

I got there a little before 12, when it was supposed to start, so I figured I would get one of the free manicures from Trippy Nails before the lines got too long. I chose Pearl for my color, and chatted a bit with the owner, but I messed it up by grabbing things before it dried, so I won’t post pictures. But still, it was nice to be pampered for a bit 😉 While there, I got to talk with the girls waiting in line behind me, as well as sample a lot of delicious food.

And a drink. I don’t generally do alcohol, but it was a raspberry puree with Disaronno and it was pretty good. And I got to keep the mason jar, which I love 🙂 I will need to find a way to make a virgin version…

As for the food, there were cookies from Yes Please! which were soft, sugary and perfect. 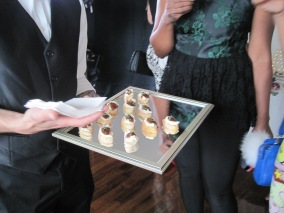 As well as catering from Forketta: French crusty bread with ricotta cheese and a roasted grape/balsamic compote. The flavors went incredibly well together…

Tiny shooters of blueberry maple sauce with french toast sticks to dip inside. The toast was slightly dry, but the taste of everything was amazing, with the cinnamon and the maple and…I poured what was left of my sauce into the raspberry puree drink and it was wonderful!

The waiter introduced this as salmon gravlax when I asked him what it was. Basically, it was like a smoked salmon with creme fraiche on top of a tiny pancake. It was topped with dill and had a slight citrus taste to it as well.

This one was exciting because I feel like I could figure out how to make it at home. It was the whole wheat tostitos scoops that we usually make nachos with, but instead of being covered in cheese, there was avocado mousse, mango, cucumber and shrimp. It was…refreshing? I guess might be the word for it. I liked it a lot 🙂 Also, I somehow didn’t realize the tray was a mirror when I took the picture…

My favorite was the tart. I didn’t ask what it was before trying it, but the waiter warned me that it had Pancetta in it, probably in case I was vegetarian. I couldn’t recognize anything in it at first, except for the honey drizzle, I only knew that it was amazing. It was when discussing it with a friend (and later looking at the menu) that we discovered it was pear gorgonzola. As in the fruit and the cheese. Kind of heavenly.

There were a bunch of booths selling jewelry, purses and clothes, even one with roses in boxes. Some were new, some were there last year, and others were at the Christmas event.

One new and awesome vendor was Miyuki Crochet. She brought her summer collection, which includes bathing suits, awesome tops as well as chokers, hats and cacti. Her website also has more winter stuff, like scarves, sweaters and headbands. Definitely worth a look 🙂

“In our society, the women who break down barriers are those who ignore limits.”