Chelsea was in town this weekend, and she was a little jealous of all of the amazing teas I have been going to, so on Saturday we decided to go to Sketch.

You can reserve for tea in the Gallery, which is the pink room, but I believe it fills up pretty quickly. Luckily, they do not take reservations for the Parlour, nor for the Glade. The doorman said it would be at least a 40 minute wait when we got there, and he suggested we come back, so we went to check out Liberty, then came back and were seated after a short stint at the bar.

Now, we chose the Glade, and the room itself is painted like a forest, and the light in the middle of the ceiling is made with branches. I am not sure how the red lights and mirrors fit in, nor did I really enjoy the few seconds per hour or so when the red lights ended up right in my eyes, but the overall effect was pretty awesome. Not to mention the space pod bathrooms, which you definitely need to check out when you go. The stalls are basically little space pods where you hear communications between Houston and some kind of space station. Unlike any other toilet I have been in.

The really great thing was that the food was not only on a level with all of the awesome decor, it was pretty amazing. Chelsea took the Champagne Afternoon tea, and I simply opted for the Darjeeling second flush.

The sandwiches and pastries come on the same tray, with the promise that scones and another cake will come later.

The waitress explained everything in detail, telling us which were her favorite, and suggesting that we eat the cheese panini first, since it is hot. It tasted like a delicious grilled cheese. From right to left, we have the panini, the quail egg and caviar egg salad sandwich, the cucumber and ricotta (which tasted sooo fresh!), salmon and cream cheese with salmon egg on top, and finally, coronation chicken with corn and peppers on top. Everything was absolutely delicious, and although I am not one for fish eggs or quail, I did try everything and it was really good. Everything except for the champagne is completely refillable, but we chose to wait until the desserts were done to see if we had room for more sandwiches, and we did not. We did discuss it though, and could not settle on which sandwich was our favorite, we would have wanted seconds of all of them.

Next, we got into desserts. I always try to go from my least favorite to the most delicious, which I often get wrong. I had the coffee tiramisu cake first, which was incredibly soaked in alcohol, then the chocolate mint cake, which the waitress said was her favorite. I was right about eating the tiramisu first, but the cake was actually not as dark as it looked, and very tasty. The mango/passion fruit round (can’t remember which) was so yummy, as were the marshmallows and meringue that came in a little cup. Sooo good. My favorites of the desserts were the pistachio cream puff and the cassis cheesecake.

They asked if we wanted a plain or sultana (raisin) scone, and we both chose sultana. They made it for us fresh, and brought it over hot with clotted cream (the creamy, delicious kind) strawberry and fig jams. I wasn’t sure about fig jam, so I tasted a little bit first, and it was amazing! The scone was also really well done 🙂 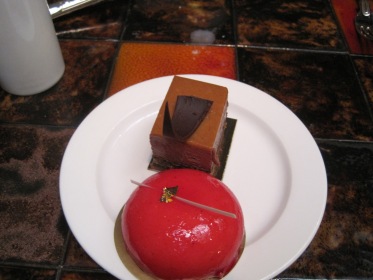 Chelsea took chocolate and I took vanilla rhubarb for our trolley cakes. We were so full at this point, but I made an effort to eat every last bite because it was just that delectable. Chelsea wants me to start rating the teas I go to, and if I had to rate Sketch, I would give it a 9/10. Not sure if I will go back and rate the old ones, but I will try and put a score from now on.