If you remember, a while ago I asked Suzanna if she could maybe find me a scene where I could work on my British accent (RP). This week, my scene partner couldn’t make it to our usual class time, so she found me a new scene, from Bridesmaids, where I got to be British 🙂

It was a short and easy, hilarious scene, but I could feel my heart pounding and the nerves building up the whole time I was filming and being on book for the other scenes. For some reason, even Suzanna’s confidence that I was well-prepared and had the accent down pat made me even more nervous.
It is the scene from Bridesmaids where Kristen Wiig’s roommates kick her out of the apartment. And my part was played by Rebel Wilson, so big shoes to fill. The first take, I just played it straight, with a smile, and let the comedy come through, only going big for a bit I yell out of my imaginary window. Suzanna and our camera people were laughing, so I laughed too and thought I had ruined the take, but watching it over this morning, I recovered very quickly. 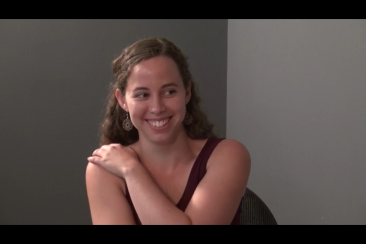 For our next take, Suzanna wanted me to go bigger, which is a note I am working on getting comfortable with. I have found a few of the scenes I have had to work on lately had lines that I yell out to characters off stage. My first instinct is to just call it out, barely raising my voice, kind of throwing away the lines. Instead, I have been trying to go big. For last week’s scene from Love, I made sure to be very upset with the girl for not taking off her shoes before going into my house, rather than making it a simple request. And for this scene, I say the lines like I am dramatically trying to solicit a gentleman off the street.  It is still not my first instinct, but it does not scare me, because I am finding out more and more that it is fun to go all in 🙂
For our last take, Suzanna had no notes, but asked if there was anything I wanted to try. When I had been working on my lines, there was one part I considered doing melodramatically, trying to make her feel sorry for me, so we decided to try that out. It was fun to try something new, and it was an interesting choice, but it obviously worked better the first way. 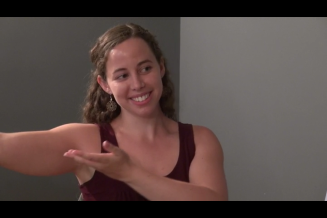 All in all, I don’t think it was entirely modern RP. I think I sometimes went a little bit too posh, and I could hear some words that Stevie would have called me on, but recognizing them is half the battle, right? And, not only did Suzanna tell me the accent was good, but everyone was laughing at every take, for the same jokes, so we obviously got the comedy 😉 For someone who is always worried they’re not funny, and afraid of doing accents in front of people, it was the perfect class to do something that makes me nervous and to push my boundaries!

“I think you can always find interesting, complex and fascinating characters to play in different kinds of movies. It’s in your hands.”