This was kind of unintentionally my motto for the week, starting off in voice class. You see, people have been presenting their monologues to the class, and our teacher has been giving feedback and working on it with them. Monday morning, the last thing I wanted to do was stand in front of everyone and present my monologue, which I really wasn’t confident with. Still, when he asked for volunteers, I stood up.
Although I normally did the monologue standing in one place talking to one person (since we were always paired off for those exercises), this time I walked all over the place so I could look to each of my classmates in turn, which was something that made it scarier, so yay me, but it also did not in any way help the performance, and actually took power away from me. And, even if my head was in on why I was doing this, my body was fighting against the uncomfortable feeling of vulnerability that comes from putting yourself out there. So, lots to work on, but just getting up there was a huge accomplishment.
In acting I mostly just explored my crazy duologue character a little more, but I did realize something during the expanding and contracting exercise, that I think translates into my every day life. You see, I was more comfortable in the contracting position, when you are squeezed tight into a ball, with all kinds of pressure on my feet, and my nails digging into my palm, rather than in the expanding one, where you are just standing and open. Taking up all  that space and being completely open, with nowhere to hide is scary, so I seek refuge in the tiny ball state, even if I know it will hurt me. In life, I like to keep quiet and make myself invisible most of the time, even if I miss out and it often makes me unhappy, because it feels so much safer than going out into the world and risk getting hurt. Luckily, realizing that you have a problem and admitting to it is the first step towards recovery, right?
On Tuesday, after a day of rehearsals, we all went to see As You Like It at The National Theatre. Having nothing to compare it to and not knowing the story, I found it interesting, and the scene change was pretty spectacular. 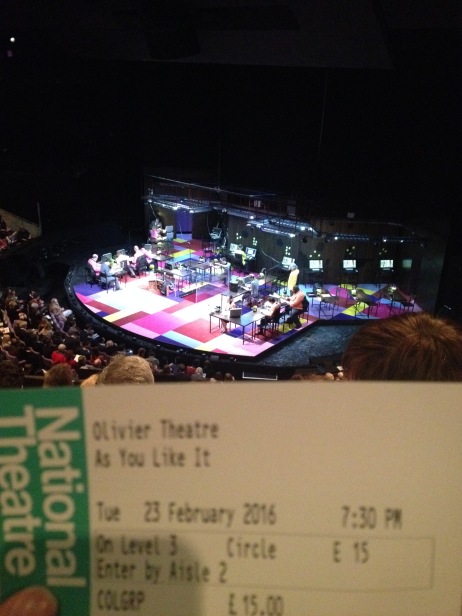 Wednesday, singing was slightly disastrous, only because I was learning the song from a bunch of different places and wasn’t exactly sure how it went, but Kailea says my actual singing is getting better, and now I have a recording to work with 🙂
I have also accepted the fact that although it is taking me longer to get the steps and the doubles right in historic dance, I still love it and I don’t care. It’s probably the only class where I am not afraid of failing, not because there are no consequences, but because I have absolutely no issues with repeating it over and over again until I get it right, whereas in other classes, every time I do it wrong, I can’t help but lose a little of the confidence I had  managed to muster. Now I need to work on bringing that feeling of fun and excitement and ‘it doesn’t matter’ into all of my other classes 🙂
Our masterclass was about the audition process, and we were given a 10 step structure, which was really interesting, especially for everyone who has been focusing on the more classical side, and been in a school setting. As someone who has spent so much time researching and taking classes and workshops on this, it was obviously really cool and helpful to have another set of steps to help me prepare, but I think I need to take what this actor taught us, as well as everything else I have on auditioning, and create my own system, with everything that works best for me. I will probably end up with a lot of steps, because I really like his, and I really like a lot of the others I have been taught, but I think it’s a lot of trial and error as well as practice makes perfect. And it’s really helpful to have a detailed starting point 🙂
Wednesday night, I went to a Women @ RADA playreading of KIN. RADA, The Royal Academy of Dramatic Art (and probably our rival school) is doing 100 playreadings, with plays written by women, and having either as many, or more women than men in the cast. I had read about it when researching what schools to go to, and thought it was an awesome idea that I wanted to check out no matter which school I went to. It was a really interesting play, with an extremely talented cast, and more than anything, I think I loved the atmosphere in that room. The next one is while my parents are in town, but I am hoping to go to the one after that, and every other one until I go home!
Thursday we had more rehearsals, followed by a run of all of our scenes, which was stressful and exciting, and gave us a good idea of things that we need to work on. I also got an hour long session with just me and Stevie, our vocal support. He must have thought I was a bit ridiculous at the beginning of our session, because I thought it was to work on my cockney accent, so I did not understand why he told me to put all of my research and preparations aside. In the end, the session was to help me because I am not on voice, and suffer from vocal fry/creaking. If those terms mean nothing to you, it’s the same as when I was told that I am sitting on my voice. I don’t breathe in properly when I talk, and I produce the sound somewhere in the back of my throat, which is why talking or singing or yelling often gives me a sore throat (it compresses my vocal cords really tightly). There was a lot of humming and making sounds and chanting, before we went into my short monologue, starting it over and over again until I was no longer creaking, or going down at the end of my thoughts. Although the session did catch me off guard at first, I really appreciate Stevie taking the time to work with me like that, and he was very encouraging. I know it won’t happen overnight and it will take a lot of work, but I hope I’ll be able to get over this bad habit.
On Friday, we worked on our modern RP scene, which for Kailea and I means a scene from Closer, between Alice and Anna, which makes me nervous for so many reasons that I will have to get over before we perform it. Then, we did our duologues in Acting class. My scene is with Phil, where we discover a corpse and I suggest ridiculous things. We got a lot of laughs and I had sooo much fun doing it. Kind of excited to see what our next scenes are 🙂
We finished with movement class, before going to a pub for supper, a big gang of us, which was really fun. We then went to Sleazy, where I danced and sang with Molly (while waiting for it to start, we didn’t actually perform!) before sitting and being amazed by the talent and the words of my fellow LAMDA students. There were songs and poems that made me laugh and smile, but also some that broke my heart and brought the tears. There were some that we all sang along to, and the whole thing was just a truly wonderful evening. I had wanted to just go home once class was done, but I knew I would be happy I stayed. Sleazy has not disappointed me yet, and I will truly miss these nights when I go home.

“Strength and growth come only through continuous effort and struggle.”