On Saturday, Wala, Kailea and I ventured out to the beautiful beaches of Brighton 🙂

We were arriving on different trains, so Wala and I went to have breakfast while we waited for Kailea. We probably could have ventured further around North Laine, but we stopped when we stumbled upon Breakfast at Tiffany’s, where we had food, and I had tea to warm me up, while Wala had a milkshake that looked delicious, with sprinkles and everything.

Next, we went to the station, for the first in a series of missed connections. We had miscalculated Kailea’s arrival time, so she had gone to the beach. We went there to find her and it was wonderful. The beach is rock instead of sand, so you can walk around in your shoes without worrying about getting sand in them. Also, just seeing the vast expanse of water, with the pier and the seagulls and…it was exactly what we needed.

We next headed to the Royal Pavillion, a palace that looks out of place with its Asian architecture in the British coastal town, but it also somehow fits perfectly. You aren’t allowed to take pictures inside, but it is amazing. The rooms were made so you walk in, and each subsequent room is more grand than the one before, until you get to the dining hall which is just gorgeous. Everything is very heavily inspired by Asia, but the dining hall  has a 12 foot dragon holding up the chandelier, and some spitting fire out of lotus plants. I could spend hours in the room and still not have captured all of the intricate details. The rest of the rooms are very interestingly styled, and beautiful, but the dining hall has to be my favorite.

Since we still hadn’t caught up to Kailea yet, Wala and I went to Brighton Pier, where we would wait until she got our message and found us. After going up and down and exploring said Pier, we decided to warm up a bit inside the casino like arcade place, where tickets and coins can be found in abandoned slots, and games become addictive. Although we won and claimed many things, we left with nothing new, since we had no real use for the tickets, or a slinky.
We finally found Kailea and went to Bardsley’s for fish and chips, but we were too early and they were closed. We went to the Cosy Cottage cafe to kill some time, and not only was my flapjack delicious, but the staff was incredibly friendly and kind. 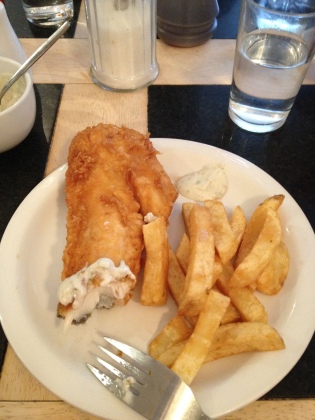 We finally made it to Bardsley’s, which I had been told was the best fish and chips. I opted for the smaller portion of the haddock, which was in fact, delicious. The home-made tartar sauce and the chips were delicious as well 🙂
We went down to the beach one last time, to breathe in the sea air and enjoy the view before heading to the train station. We missed our train and had to take the next one, but even that couldn’t ruin our wonderful day 🙂