I started off my week with a pole dancing class, where we learnt a fun routine that looked way out of my reach before we started, but was looking pretty good by the end of class.

That evening, I went to the Monday night ‘Amazon’ BJJ class. A huge part of me wants to get completely discouraged when I keep ending up on the bottom, or tapping out, but then I remind myself that I am a beginner, who is still learning, and the reason why I feel like I am doing worse than when I started is because people are no longer treating me like I have no idea what I am doing. Which I think is a good thing?

On Tuesday I worked as a standardized patient, then went to NOGI Jiu-Jitsu in the evening. Being the only girl with a bunch of guys no longer means that I am going to have an easier time and get coached through every move, but I am still learning a lot. And I find it a lot easier to remember why I don’t want to be in a certain position after I have had someone do something to me in that position. For instance, I used to squirm out of someone’s control by turning my back to them, which worked when they were taking it easy on me and letting me. David and Ayisha kept telling me not to show my back, but I didn’t really see it as an issue. Until people started taking advantage of my turning my back. Using it to get me into chokeholds and such. Now, when my back even starts to get exposed, I immediately work on changing my position, because I know it’s somewhere I don’t want to be.

On Wednesday I got a private boxing bootcamp lesson. They’re cool because you get a lot of attention and get worked hard, but you also have to be ‘on’ the whole time. If you slow down or modify a move in a class with a bunch of people, there’s a good chance the teacher won’t notice. If you’re the only student, chances are that he will. Which ultimately gets me a better workout, and sometimes hurts my pride. But I still love it. Especially the padwork at the end, where we learn combos and I feel both incompetent and like a badass at the same time. I know what I have to do, but my body often doesn’t listen. Like with my hands, for keeping my guard up. I think I might need to get knocked out when my hands are down so I’ll always remember to keep them up in the future?

That afternoon, I headed to the ACTRA offices for the TAWC meeting. I’m not sure if I have mentioned this, but I really love how ACTRA Toronto not only considers me a member, they let me be a part of things, like this committee. At the end, we got a crash course on social media, so the meeting ran a little late and I had to rush to get to my jiu-jitsu course.

I believe it was my first Wednesday class, so I wasn’t sure what to expect, and ended up in a class where everyone was at least 15 years younger than me. They still usually manage to get the upper hand on me, which is fine, but sometimes I get to be the one who knows a little more and teaches them something. The moves I remember most are the ones I have helped someone else to do.

I was back to being on the younger end for the 8 o’clock class, which was busier. Afterwards, we all went out for steak nite at a local pub. It was really nice to get to know everyone as people rather than just as jiu-jitsu classmates and teachers. Great food, amazing company…an awesome Wednesday night.

On Thursday I had a friend come over, partially to keep introducing them to Buffy, but mostly to ensure that I wouldn’t find an excuse to not go to the monkey vault that evening. I had thoroughly enjoyed my last visit there, but the combination of class, staying after class and then doing a boxing bootcamp right after had left me with arms that felt dead for nearly a week afterwards.

In the end, not only did I make it, but I brought my roommate and the friend with me. This class concentrated a lot more on jumps, rather than climbing, so my arms were fine, and I started getting more comfortable with a few things. Which is surprising, because my roommate pulled a muscle before we were halfway through the class and had to sit the rest out. In her defense, she was doing awesome up to that point, and came back for the hanging competition, whereas I would have wanted to use my leg as an excuse to not have to do that.

We stayed after class, having fun with the equipment, and I showed them what I had learnt last time I came. I am still hesitant with a lot of things, and know it is my fear that is holding me back, but whenever I trusted myself and tried things, it always worked out for the best.

The next morning I went to another boxing bootcamp where it was just me and the teacher, where I got quite a workout in. He also tends to film snippets of me doing the moves, so while I feel like I am doing them right, I get to watch the videos and make the necessary adjustments. After the circuit training we learnt a new combo where we focused on speed, which was really fun. At the end, he stayed longer to show me how to kick.

Eventually, he headed out and I stayed for a jiu-jitsu class, which has always been me and 2 other people so far, but this time we were a bunch of us. We worked on some techniques, with Ayisha giving us all kinds of pointers, then there was rolling, which we don’t usually do on Fridays. 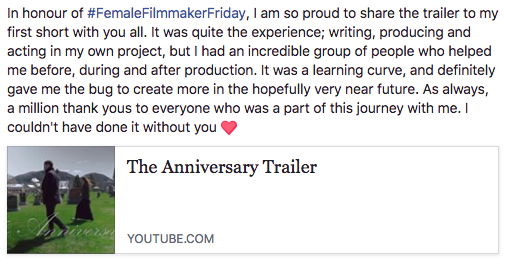 I went home and worked on things, such as releasing the trailer for The Anniversary and getting it on imdb, which I am super proud of. We are in the final steps of post production and I can’t wait to see the finished product of my first filmmaker adventure.

I had full intentions of going to gymnastics that night, but just as I was finishing supper, my roommate invited me out to some parties with other actors, so I spent the night networking instead. Or, you know, making friends and cultivating relationships, which is super important career-wise, and good for the soul.

On Saturday, I was one of the volunteer actors for a Director’s Workshop at Ryerson, where I met an amazing director and a lovely group of actors, then got to be directed by one of the students. It was really interesting to see the different approaches different directors take to the same material.

I had some time to kill, so instead of going back home for a few hours, I caught up on some movies. Annihilation, Pacific Rim: Uprising and Tomb Raider were the ones I saw, 2 of them with my roommate, and I was thrilled to see that all 3 featured some amazing, badass, strong female characters for young girls to look up to, that I would absolutely love to play. 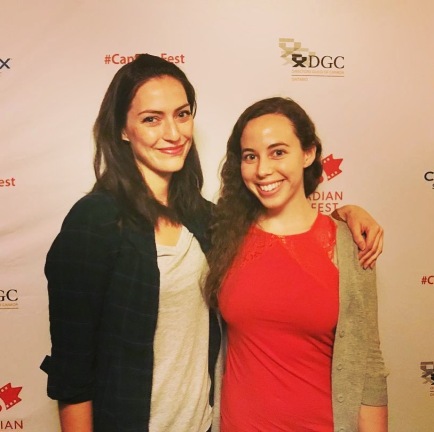 After the movies, my roommate and I headed to the closing party of the Canadian Film Fest, where we got to support local filmmakers, mingle and dance the night away. It was an awesome, inspiring night and a peak into a world I can’t wait to really be a part of.

On Sunday I went to a pole dancing class and had a lot of trouble pushing through the pain of squeezing my bruised shins against the pole. But we also learnt a really cool and (I found) easy spin that was not painful. So silver lining!

Afterwards, I had some friends come over for an afternoon of brainstorming and coming up with an idea for a short that we could shoot together. We started out by figuring out everyone’s goals for the project, and by the end we had a story that met all of them. I can’t wait for our next session, and all the amazing projects we hope to do together.

Monday I packed up and headed to 4 points, because although I had to drive to Montreal, I didn’t want to miss more classes than I had to, and especially not the Amazons class on Monday nights. I left before the rolling, but at least I got in my techniques 😉

“If you have a good idea, get it out there. For every idea I’ve realized, I have ten I sat on for a decade till someone else did it first. Write it. Shoot it. Publish it. Crochet it, sauté it, whatever. MAKE.”