A long time ago, I had decided I would do something every day to advance my career, be it acting, research, calling people or whatever.A week after making this resolution, I decided it was impossible to do something every day, but lately, I seem to be doing it without trying, just because acting is always on my mind, and my favorite thing to think about. Whenever I am near a computer, I just can’t help looking up headshot photographers, acting advice, actorfest, classes…that isn’t to say I don’t do other stuff and have a life, but I keep feeling like the dream is becoming more real, or concrete.

Last Saturday, I went into work with my mother, and spent the entire day working on my acting. I emailed headshot photographers, created my personal website with castingworkbook, created casting alerts at backstage, figured out which cell phone I will get in the States and did a list of everything I had to do in preparation for actorfest.

On Sunday, I went to Montreal for the Improv Homework Club and had a blast. We are thinking of making it a weekly thing. It’s kind of like the classes, only instead of learning new stuff, we just practice the old. There was also constructive criticism and advice, which was fun. After improv, I went to my grandmother’s for Thanksgiving supper. And maybe this has nothing to do with acting, but it definitely has a lot to do with my confidence, so I will share anyway. I brought all the clothes that are too big for me to my grandmother’s so I could give them away. Normally, I hold onto these clothes, in case I eventually go back to a size where they fit, but now they are all gone, so I have no safety net. Kind of like I am betting on me. 🙂

I had to readjust my headshot plans, but am really happy with the way things turned out. I decided to go with the slightly less expensive photographer on December 2nd, and hopefully get advice on which ones are best, and get them printed while doing ISP. Then, I will hand them out at actorfest, get the opinion of some Casting Directors, hopefully, and then make adjustments if necessary when I come back in January. The cool thing about this idea is that if the headshots aren’t as great as they can be, I can take their advice and get them redone in January, then send them out to all kinds of agents, as well as the casting directors, to show them i listened to their advice, and because you shouldn’t do a sendout if nothing new has happened. But, ideally, the headshots will be amazing and do what they are intended for…help me book auditions and roles!

In addition to all the photographers, I have also sent a lot of emails to all the schools that I plan on taking classes with, so I can figure out what date I should go back in January, and I am not shocked, but really happy to see how nice everybody has been. Not that I expected them to be mean, but when a photographer was already booked on the day I requested, he didn’t just say “No, sorry, I can’t.” he emailed me back with suggestions of other photographers I could shoot with. But, I am really excited with the one I chose, and am looking forward to it, even though I didn’t really enjoy getting my headshots done last time.

Last night I had my acting class with Suzanna. I got there early, so ran my lines a few times outside the door before more students arrived and we talked about what we do, where we live and stuff before Suzanna showed up. We went up to the room where we have class, but then everybody went off to rehearse. My scene partner and I read our lines a bit before following, and realized we maybe weren’t quite as prepared as we had thought. I knew I didn’t know my lines 100%, but I figured that with him saying the line before, I would figure it out. It turns out that Eric didn’t know his lines 100% either. I think both of us would have managed perfectly had the other person known theirs, but we both (or at least I) expected the other to help us figure it out, which didn’t quite work out. I would say my line slightly differently than it was written, and since the dialogue is pretty similar from line to line, I wasn’t giving him the proper cue, which led to us calling line a couple of times. Even worse though, is that we were thinking about our lines instead of being in the moment and playing off each other. I think we got better as we did it over and over, but I definitely don’t want to go there again without knowing my lines as a reflex, without having to think about it. I had watched a youtube video of casting directors giving advice to actors, and what they all said in common was to be prepared when you walk in, so clearly it is extremely important.

We got new scenes for next week, when we will be doing a cold read on camera with a scene partner, and I plan to know my lines so well that I could recite them in my sleep. It’s a scene from Weeds, where I am playing Nancy opposite Luigi’s Doug. I haven’t gone over it yet, so I don’t know which scene it will be, but I am really excited to find out and to practice it. Repeatedly.

I also got to man the camera for one of the scenes. I enjoyed it, like last time, but I accidentally forgot to press record once, so I will paying more attention next week.

I watched the DVD of our scene when I got home, and it wasn’t as horrible as I was expecting, but I could have been a lot more in the moment, and I need to be better at listening when my scene partner is talking. I should be reacting to what they are saying instead of thinking of my next line. We will be doing this scene again in two weeks, so I will keep working on the lines so I can nail the mock audition.

This week, I have to make cue cards and learn my scene from Weeds, practice the scene from Cheers, I have a work party on Saturday, I am getting my headshots done on Sunday with Adrian, and would like to finish the book Acting in Film by Michael Caine, which I am loving so far. Also, I made a list of casting directors that I would like to call to offer my services for an internship or just to volunteer when I am in LA in January. It can’t hurt to see what it’s like on the other side, and to get familiar with the world of auditioning! 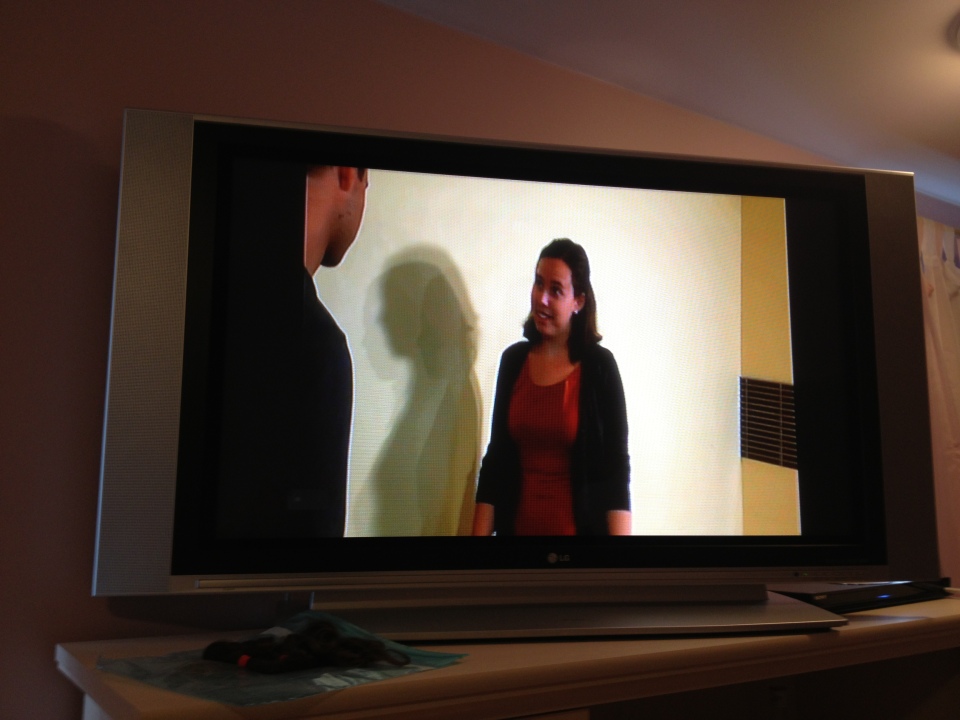 Also, since I watch way too much TV for my own good, this week I really felt inspired, or got excited by two shows in particular. Revolution, because Tracy Spiridakos is a Canadian girl, like me, who went to Vancouver, landed a few roles, went to LA, got an agent, then got the role of Charlie during her first pilot season. I’m not saying she didn’t put an incredible amount of hard work into this, and I’m not implying it was luck, I’m just pointing out that she was so amazing and dedicated that within a year of her first trip to LA, she is on a show me and my brother watch every Monday. I understand that she has been working at this for a long time and had a lot of roles before she went to LA, but it’s just really inspiring to see that it is possible. That she is making it.

As for Glee, it was a pretty sad episode, rightfully titled The Break-Up, but throughout a lot of the Rachel and Finn scenes, I couldn’t help but really want to be like Rachel. I don’t mean I want to get my heart broken and lose the first guy I’ve ever loved, but if you’ve followed the show, you know that Rachel didn’t have many friends in high school, and people made fun of her, but now in New York, she is amazing. She has friends, she goes out, she sings on stage…it looks like it all came together for her, and she has so much confidence. I’m hoping LA will be like that for me. I won’t be going to NYADA, or singing on stage, but I’m hoping I will fit in and find my place and let myself shine, like she did. And, when Blaine showed up at her doorstep and she was all excited that everyone was back together, I was thinking that was going to be me. I was really scared about being alone, and having no friends when I am in LA, but a friend of mine who recently moved to Vancouver is planning on coming to visit me in January, so I will have a friend to explore the city with!