Tuesday’s class was a lot of fun, like it always is. We had a new guy in class, which is always interesting, to get to meet new people and find out about their different experiences. I am his scene partner, and we are working on Her. No, I am not the operating system. I had been a reader for this scene once before and I absolutely love it. There isn’t enough information in the movie to know exactly what happened in their marriage, who did what and who blamed who, which means you have to discover it for yourself. It can also be played so many ways, with me simply caring about him for old time’s sake, or possibly wanting him back. It got so much better every time we did it, because we were understanding the characters better, and starting to know the lines. I am really looking forward to filming it next week 🙂

I also did a self-tape this week, although not for myself. I have been trying to take Jesse Williams’ advice and offering to help out whenever a friend needs a reader or something for a self-tape. So, when a friend personally messaged me to ask if I could read for their self-tape, as opposed to a general facebook post asking if anyone is interested, I absolutely had to say yes. It was a nice scene and I was really impressed by my friend. I have obviously seen him act before, we were even sort of in a short together, but watching as the audition scene improved, how he discovered the transitions and took everything in…it would be nice to get to work with him again someday. And I got to see what it’s like doing a self-tape at that particular studio, which is always nice to know for future reference. And, as I mentionned a few sentences ago, if you need a reader, don’t be afraid to ask. I had a lovely time and would definitely do it again 😉 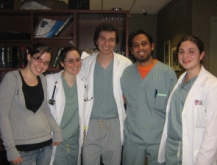 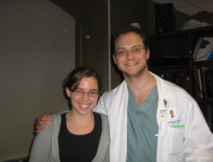 Also, I got to play a med student yesterday at work. It is not the first time, but usually it is normal person situations, like resolving conflicts. Yesterday, I got to actually deliver a patient history and discuss a treatment plan. It was fake, of course, but it did give me a tiny taste of what my life might have been like had I stuck to my plan of becoming a doctor. I posted a few pictures of me back in high school, when I spent the day in the O.R., watching surgeries, then doing the rounds with med students and surgeons. It was amazing! Hopefully, one day I’ll get to be the doctor I never was on TV 🙂

“The starting point of discovering who you are, your gifts, your talents, your dreams, is being comfortable with yourself. Spend time alone. Write in a journal. Take long walks in the woods.”