This week has been absolutely crazy and I am loving it! It actually isn’t done, since we have improv and a casting associate tomorrow, but I don’t know when I will get free time again, so I thought I would write a little something on here.

I never really doubted my decision to do the ISP, but if I had, all of these doubts would now be gone. We are a group of 14 ISPers, and each and every one of them is amazing, and so fun to be around. Which is good, because we rarely leave each other’s sight. The program is designed to be intense, and to put as much as possible into two weeks, but the schedules they gave us at the beginning don’t come close to the actual amount of time we spend learning.

Monday we started out with Robin, who was incredible, learning how to be human beings. It sounds funny to say you have to stop acting, but it’s true. Scenes here are called slices of life, so for two days we mostly learnt some theory in the morning, had 30 minutes to analyze a slice of life before doing it in front of the camera, then we all got together and critiqued them. Very enlightening! 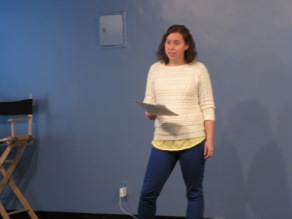 Tuesday evening, after most of us went to Hudson’s for a bite to eat, we had a session with a voice coach, who asked us each what we wanted to work on. We had 2 hours, so I was skeptical and thought we wouldn’t learn much, but he was very perceptive, and caught on to the underlying problems. I don’t have a small voice, I am just afraid to assert myself and use it. So, from now on, I am trying to stand tall, be confident, and want to be heard.

On Wednesday, Margie had a bunch of the actors from her class come and tell us about their careers, the auditioning process, agents, managers, etc. It was so nice of them to take the time to share all of their insight with us, and they were all really nice and took the time to really answer our questions. What a lot of us took from it is to produce or write our own things, like webseries or shorts. If things aren’t happening for you, make them happen!

After that, we had John, who also had us do a slice of life, but it was really ambiguous as to the relationship, so that we could see how important that is in a scene. I completely misinterpreted it, but I stuck with my choice and definitely learnt from the experience. 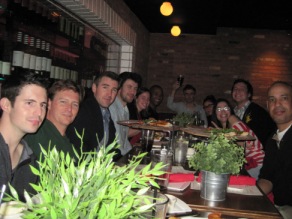 Once class was done for the day, most of us headed to the Grove, where we enjoyed a light snowfall, ate at Faux Pas, and saw Lincoln. It finished at 1 in the morning, so we were all exhausted, but it was an amazing piece of storytelling, and definitely worth it in my opinion!

Yesterday, our first class was cancelled since the actress who was supposed to talk to us, Judi Shekoni, had an audition, so we all went to IHOP before going back to the studio to hear from a Talent Manager. Although most of us probably left that day thinking, “how do I get one?”, the point was to understand what a manager does, what to put in a resume, what makes a good headshot…As a Canadian, I have a ways to go before making my way to the Hollywood market, but I feel like I know a lot more about it now, and Talent Managers do sponsor actors, which is good to know.

After class, a few of us walked up to Sunset and saw the sights, as all tourists should, before heading to the Village Idiot for supper, followed by an amazing Cooking with Gas show at the Groundlings. It was hilarious and although I think it would be terrifying to be put on the spot like that on stage, I would definitely like to take some classes there!

This morning we finally got our time with Judi Shekoni, who was worth the wait. She mostly talked about her journey and what brought her to where she is now, but every story she told had some advice behind it. She told us what to put in our reels, in our resumes, when to come to LA…I really feel like I learnt a lot, and although she didn’t encourage us to blindly pack up and move (she was very sensible about being the best in your market and training and stuff) she did make it seem possible, like if we truly put in all the work, we could make LA a land of ‘yes’s! 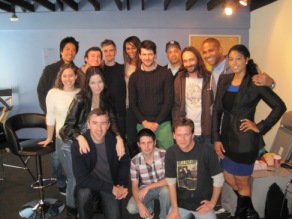 It was a crazy week, but it was amazing. In addition to all of the ISP stuff, I also got to see a screening of Flight, with a cast Q&A (amazing!), met a girl I might help to learn French, and did my Headshot photoshoot. It was quite the adventure trying to find the place, but once there, Cathryn and Dallas were so sweet and welcoming that all my troubles were forgotten, and I can’t wait to see the amazing pictures she must have taken. I got a million different looks, complete with hair and makeup, and so much more than my money’s worth!

I am looking forward to another crazy and exciting week of ISP, but I do have to admit that I miss my family back home. It would be amazing if they could all be here, but I guess I have to make my own way in this world, and I have to put myself out there without my safety blanket…