When I left work on Friday, everyone was anticipating the long weekend. Yesterday was Labor Day, which could have meant 3 days spent lounging by the pool, catching up on some reading…a vacation. Instead, I got to do something a million times better. I got to act and do what I love all 3 days.

It started out on Saturday, with some outdoor scenes for Diablo, a short fan film I am lucky enough to be a part of. We had to create an old medieval village, so I was out in the country with an awesome group of people. I decided to take advantage of the remoteness and didn’t use my phone or anything all day. Which means I still have no idea how I looked with the makeup and the dress (from the front), but it was an experience. As for the actual filming, we have been working on this for so long, and had rehearsals and I really got my character, so it was a blast to film. Nice and innocent is what I am good at. Plus, I got a thigh strap for my mic, which may not sound like much, but I am excited every time I get something that I usually associate with bigger productions.

On Sunday, we reshot the ending for a scene from The Cohort that we filmed a couple of weeks ago. We were only 4 of us and it was a very short day, but still a lot of fun. And it meant I got to spend a lot of the day writing and editing, so very productive 🙂 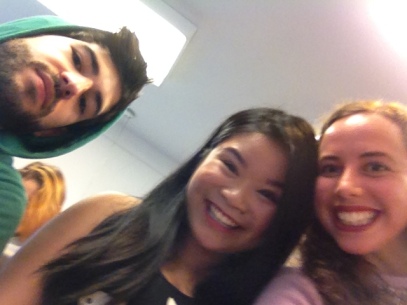 On Monday, the day started out with a screening for Keep Calm and Make Art, where I got to catch up with Carolyne, the director and some ‘crew’ (our crew was made up of other students, so they are filmmakers in their own right 😉 ). I also got to see a few of the other shorts, before I had to get to set for some more filming on The Cohort. This time, it was a much bigger scene, with a lot of actors and extras. We were a lot of people crammed into a tiny room, dressed like we were in the middle of January, but it was so much fun. So many of us had lines, that it really felt like an exchange, and even reacting to what other people say is really fun. I love the collaborative nature of this project, and being able to play with my character.

All in all, it was an awesome long weekend. The only thing that could have made it better would be if it truly were a vacation, where I took time off to swim and read and barbecue with family, because I would get to be on set every other day of the week 😉

“You only have one life and if you’re not doing what you love, what’s the point?”

How Do You See The World?

Two Is Better Than One...