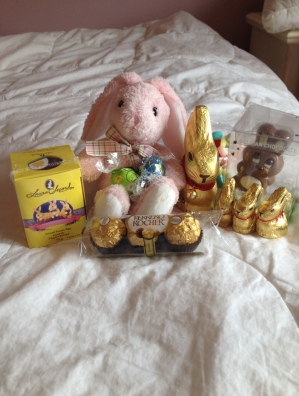 Hope everyone enjoyed their long weekend 🙂 I finally got my birthday brunch at Chez Cora, and spent lots of time with my family, including an awesome easter egg hunt. Passerbys might have found it odd to see the 8 of us rushing around, reading clues and finding chocolates, especially since the youngest among us were 22, but we wouldn’t have it any other way 🙂

Also, Dark Shack is now on imdb, you can check the page out and give it a like here:

As for last week, on Tuesday Rikki and I went to Dale Carnegie. We had an interesting discussion with some of our classmates about what it would take for us to hypothetically agree to a nude scene. For some it simply required lots of money, others wanted a union behind them or a powerful script that warranted it. I also gave a speech about how I controlled my stress during the auditions last week, which won me the Breakthrough Award. It was of course very exciting and inspiring, as well as the skits we did afterwards, which tell me our coaches think I have issues with power, intensity, using my space, etc.

On Wednesday I had a meeting for a short film. For some reason, I love stressing myself out over these, because I don’t really know what to expect. With auditions, you know you have lines, or a cold read or something, but when you are meeting at a coffee shop, any kind of performance would look weird, so you will probably just talk. But are you talking your way into a role, or do you have it and are just ironing out the details? This is a question I should probably ask, but ‘do I have the part?’ sounds weird to me, so instead I slightly stress out before going there and finidng out that I already had the part. I guess it’s better to be mentally overprepared than to think I have the part and find out I actually don’t. So, long story short, I will soon be filming a scene for a short with a bunch of cool actors, most of whom are already friends, as it turns out 🙂

Yesterday I spent more time with family, and got to see Noah. Not exactly the story I remember, but Emma Watson was amazing in it. So many good movies coming out soon, and I can’t wait to see them all!

“Today you are you! That is truer than true! There is no one alive who is you-er than you!”-Dr. Seuss