Some very interesting things have happened in the few weeks since I last posted. Chronologically, I will start with the last class of the month at Suzanna’s; audition class. We spent the first few minutes discussing how I went from being in class indefinitely, to “I’m moving to Toronto in December.” Suzanna wasn’t ready to lose me to Toronto, and to be honest it didn’t seem real to me yet either. I was apartment hunting and figuring out budgets and finding all kinds of potential roommates, but it still felt like something that wasn’t really going to happen.

An old friend from class came in unexpectedly, which was really nice, then I did camera for the first scene. I hadn’t printed my scene, so my reader eventually had to go through my phone for his lines.  I chose the one from Narcos, which was good, because there were all kinds of different things to explore, like really flirting, just being relieved to see a familiar face, being worried about my husband vs not realizing it’s serious until he talks to me. I felt really bad that I was distracted during a lot of the other scenes, since there was a conversation going on to decide whether or not we wanted a certain apartment in Toronto. For the commercial part Tracy and I did a really weird one involving a hooked hand and a parrot.

The rest of the week was a blur, because although I left class thinking I would be back for the month of November and only moving December 10th, our first place fell through and we ended up finding a bigger place, with a new roommate, and a much closer move-in date. By Friday, we were leasing a house and moving the following week! 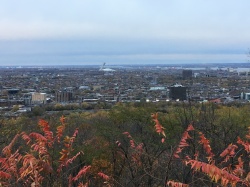 My last weekend in Montreal, I filmed a short called The Girl on The Run. I don’t want to give too much away, even if its intended use is for film school admittance, but I definitely got to play some intense scenes with a whole lot of emotions. I was in awkward and uncomfortable situations, then running in heels in the cold and rain. But I loved it. Because I was on a set and I was acting 🙂

Sunday was a family day, for my niece’s and my brother’s birthdays. It was nice to see everyone before leaving, but it also convinced me that I will have to be coming back often. Probably not for every Sunday night dinner, but at least the birthdays and holidays. 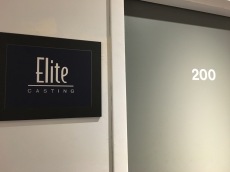 My last week should have been spent packing and getting things ready for the move, so I would have a job and agent meetings and stuff lined up once I got to Toronto, but instead, I was working. Apparently that’s how things go, that as soon as you’re leaving, everybody wants you. Well, not everyone, but I did spend one day as a reader, two days on set as background and one day at Mcgill as a standardized patient. It was a really emotional scenario where I cried every single time. Last time I had to cry for an audition, I was going through some stuff personally, so it was really easy to get the tears to come. This time, it was good to know that I could cry consistently even when I wasn’t going through stuff. Although I guess I was moving to a new city, away from my family and almost everyone I know. But that still didn’t seem real, so it wasn’t affecting my emotions. 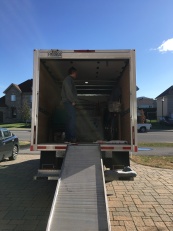 My brother and his girlfriend came over on Friday to help pack up my stuff, then on Saturday my parents and I drove to Toronto, like we had countless times before. Only this time, they drove back on Sunday without me. Because I was staying. Because I live here now.  (In Toronto. Not because it wasn’t clear, but because I sometimes need to remind myself.)

I’ll write another post to recap my first week here, which will hopefully have all kinds of new and exciting developments, but for now, thank you so much to everyone who encouraged me and believed in me and convinced me that this was something that I could do. To everyone who gave me advice or people to contact or reached out…I appreciate you all more than you could ever know.

And to everyone I know in Toronto, I’m here! So let’s hang out 🙂

“Moving on, is a simple thing, what it leaves behind is hard.”

Prophecy (The Owens Chronicles Book One)